There was a special welcome awaiting our members for this first meeting of the year, a year which also marks the 20th Anniversary of The Senior Tigers. On every seat there was a gift pen for every member along with a special card to mark the anniversary. At the front were two wonderful decorated cakes with the promise of a piece for everyone who came, well over the 150 mark. When the Chair gave his usual warm welcome he called upon those members of the original committee to step forward and cut the cake before they were taken by the Events staff to prepare for the refreshment break. In addition to the four former committee stalwarts we also invited all other original members to declare and a further six stood and received the applause of all present.

The Chair then called upon two guests who had been invited, Pauline Hardy from England Netball and Sarah Johnson, the East Riding Sports & Active Community Officer. They briefly introduced themselves and the programmes they have established to engage ladies of a certain age in healthy activities, walking groups, Walking Netball and even Lifting Tea Cups! The hope being that this would encourage some of our members to get involved in existing activities or even set up their own – why not Senior Tigers Walking Netball? The members were informed that the first Walking Netball teams were in the East Riding (Haltemprice Leisure Centre) before England Netball gave it their support. Ladies, the opportunities are there.

Another welcome was extended to Kerry Jennings who was representing Wiltshire Farm Foods. They are long established in the provision of ready meals that are delivered direct to the home for a modest cost. Whilst Senior Tigers were not endorsing Wiltshire over other firms making similar provisions the committee felt it was something that members would appreciate when Wiltshire came calling.

Now down to football issues, after all that is what brings us together! Our meeting on 6th February would bring the official Launch of our new Memorabilia On-line Archives. It has taken a full 2 years since that special day in 2018 and a massive amount of cataloguing and computing has been happening but, at last, we will have something to show members for that work. It will be a very special afternoon and members were encouraged to turn up. Meanwhile for our January meeting we were going back into the Archives of Club history as our good friend DAVID BOND introduced ROY BLY and engage him in a fascinating conversation about Roy’s father, the great and legendary BILLY BLY. During this conversation we were reminded that Billy always preferred to be called BILL, but no one listened! He was sometimes referred to as the “Brittle Bone hero” and more particularly as “The India Rubber Man”, a title which gave itself to his official Biography. He was born in Newcastle exactly a hundred years ago. He watched Newcastle United as a boy and started playing at school, in goal only to find he got cold and asked to play up field. He was started at full back, then centre back and even centre forward. He just loved playing, for school and the Walker Boys Club but his fate was decided when their goal keeper was injured and Billy was sent between the sticks and there he remained although he would say “it was never my goal in life to spend it in goal”! He continued playing as an amateur and earning his living by decorating houses when Hull City came calling and invited him to join them as a young professional. He responded but it so easily might never have happened. Going to his first match he got lost and missed the kick-off only arriving in time for the second half. They put him in the young Tiger’s goal and 45 minutes later he was signed. That was 1937, he was just 17 years old, and they offered him £2/10s per week with a bonus of £1 if he played for the 1st team.

The 2nd World war would sadly interrupt his career, like it did for a whole generation of footballers. Billy was called up to the Artillery Corps but it soon became an extension of his football career. He was selected for the British Army of the Rhine (BAOR) team and found he was excused many of the normal soldier duties. A key behind this was a certain Edward Heath, a future Prime Minister. Billy also played for the Land Army Select XI, which was full of international players. He kept the menu from the post match meal along with the signatures of the England team that had lost to France 2-0. Team mates included Stan Mortenson, Joe Mercer, Maurice Linley and the Compton brothers.

After the War Billy returned to Hull and became the Tiger’s Number One keeper under Raich Carter. In 1954 he was selected to play for England B against West Germany but the Tigers insisted on him playing first in a friendly against Falkirk when fate again played a hand and Billy broke his hand, so his opportunity to represent his country the following weekend was lost and he was annoyed!!

Outside football Billy continued Painting & Decorating, decorating houses for Alec Ramshaw before they sold the house; he even painted the ‘For Sale’ signs! He also ran his own sweet shop near Boothferry Park. Although he had retired he was pressed to do a favour and play for Weymouth Town. He obliged and the team were drawn at home to the then mighty Preston North End. Unfortunately a dense ‘pea souper fog’ descended and after 10 minutes the referee called the game off, but no one told Billy! He was blissfully unaware as he stood between his sticks, thinking his team were doing really well at the other end. Then the search party came and rescued him!

Although our dear Barbara was unable to be with us she sent an able deputy in Ian Puckering. Members were reminded that the Hawes trip was full and would leave the car park at 8.00 am!! The trip to the steelworks in Scunthorpe on February 20th was also full but members could add their names to the waiting list. There were places still for the visit to Wold Top Brewery on 19th March, a visit which would also include lunch in Bridlington. The Senior Tigers were going to be Associate Sponsors for North Ferriby United v. Dronfield Town on Saturday 28th March. It is hoped that members would like to turn up and if they let us know space will be reserved for them to stay together. 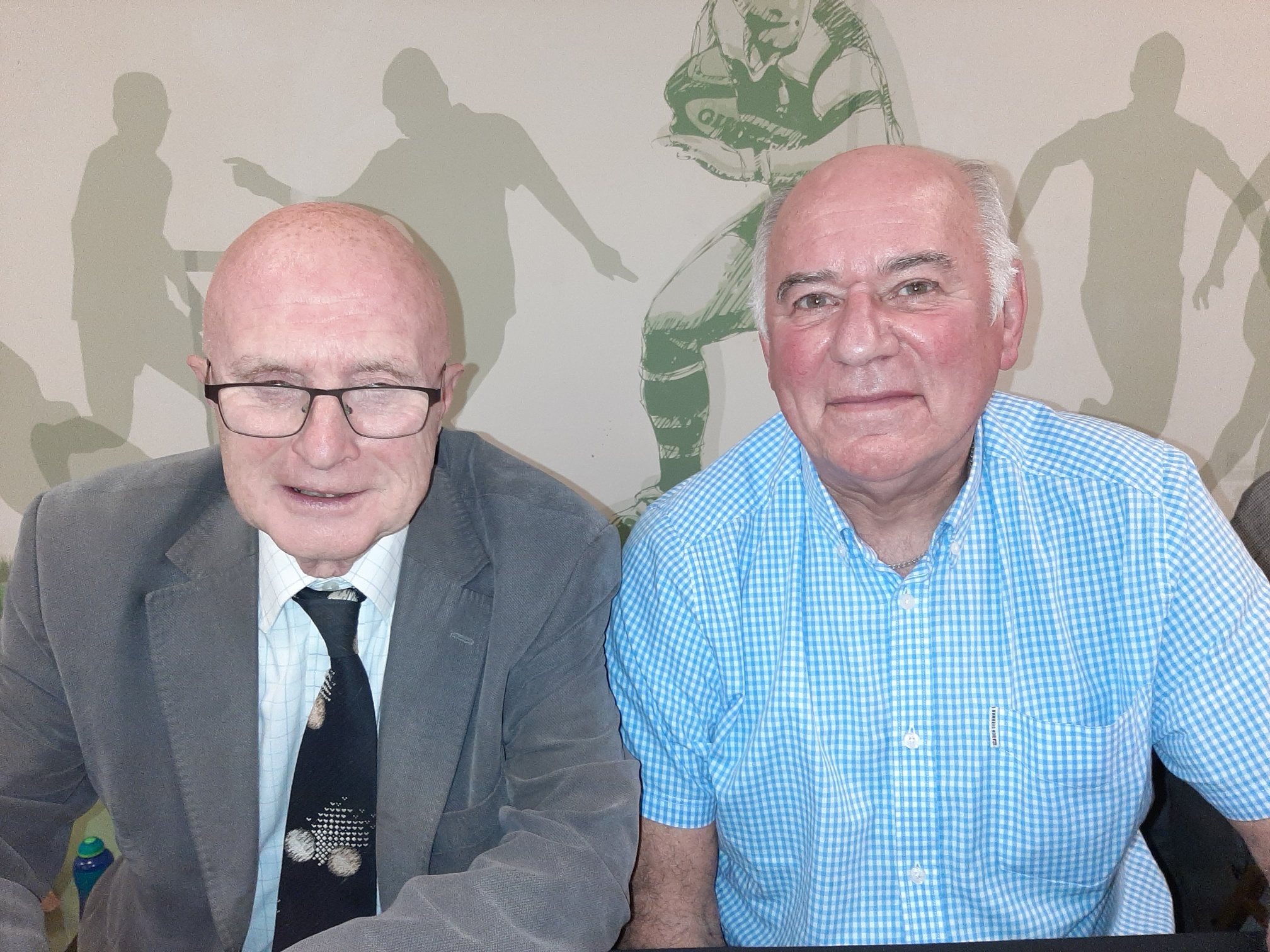 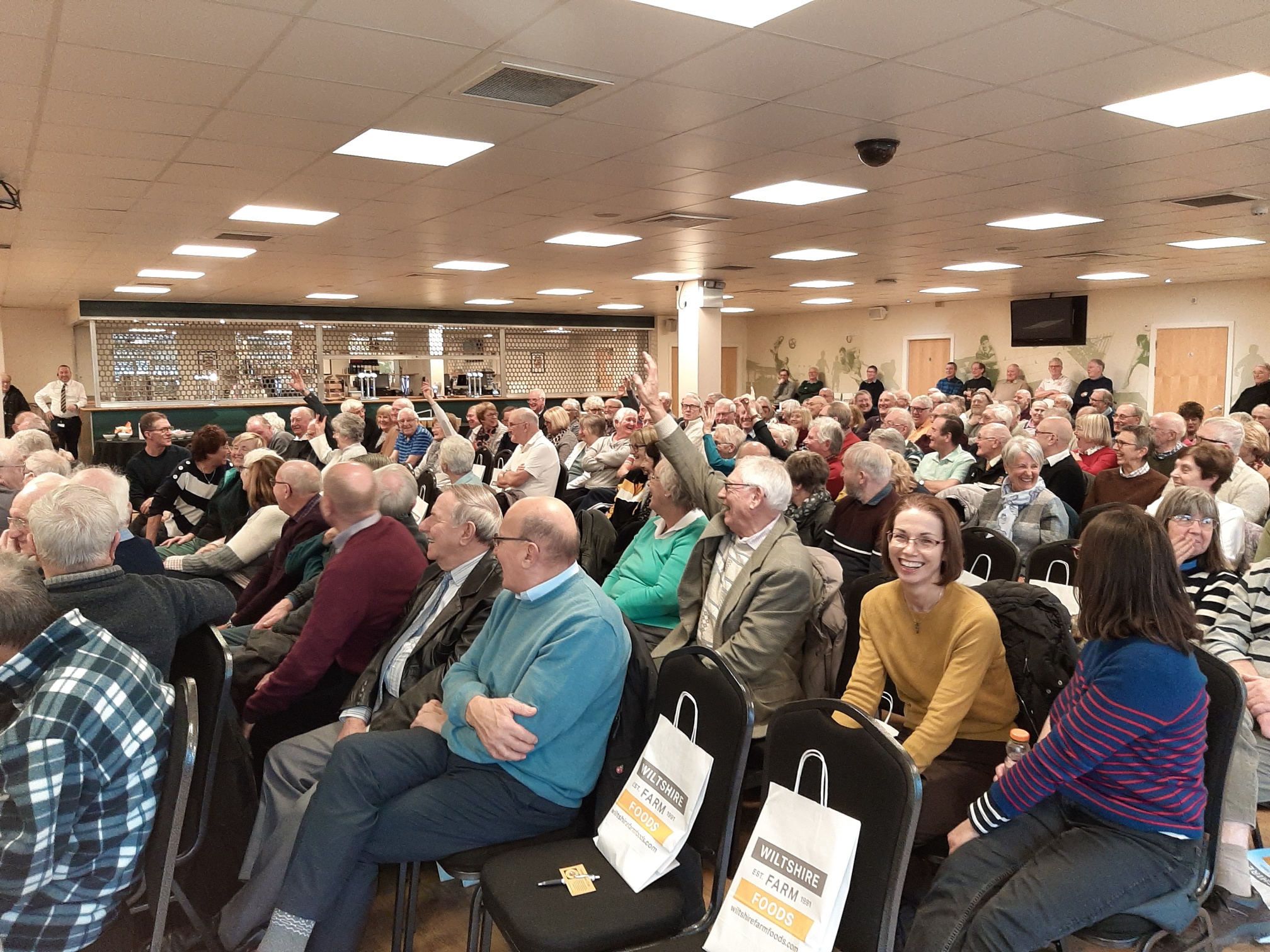 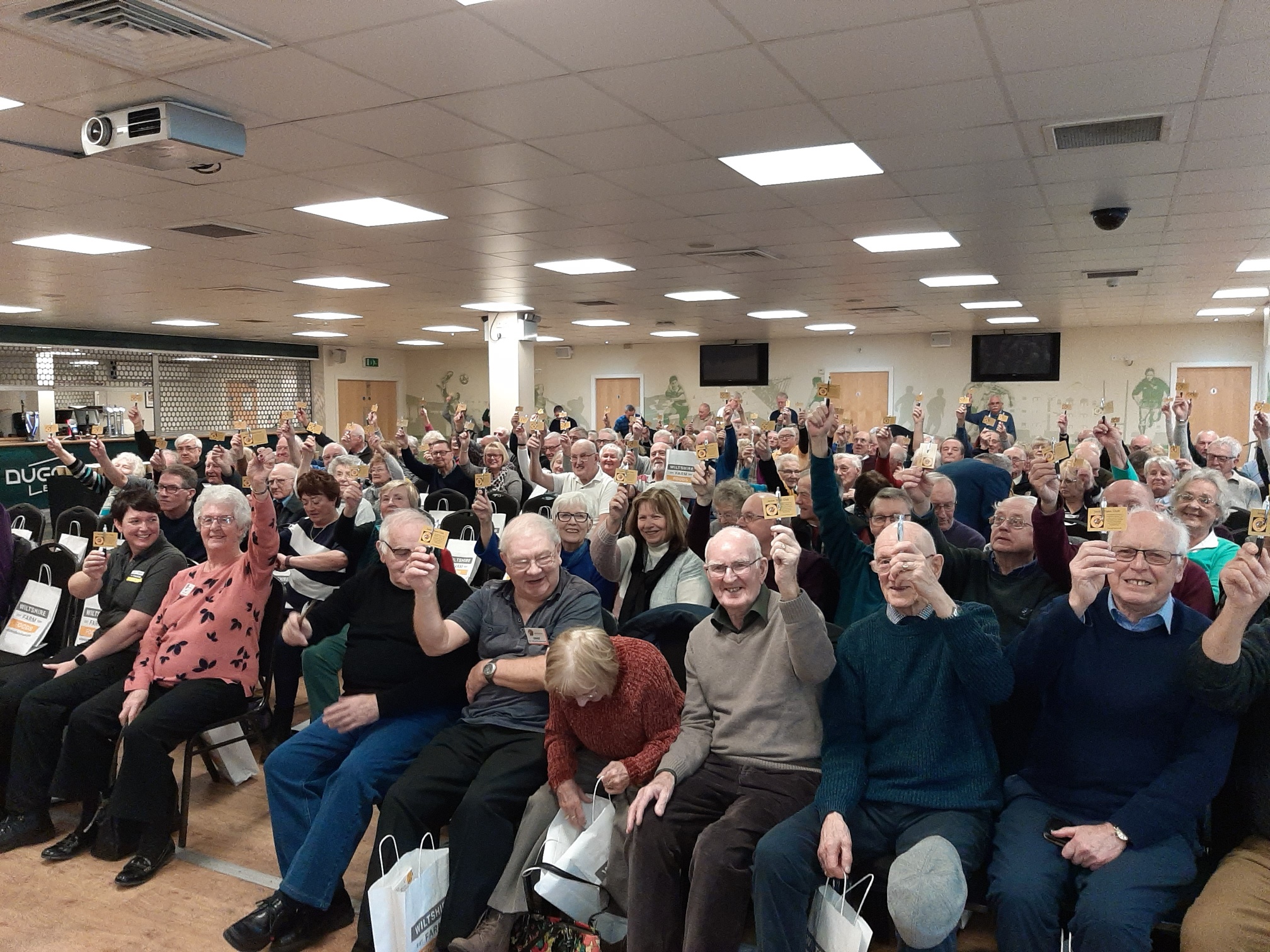 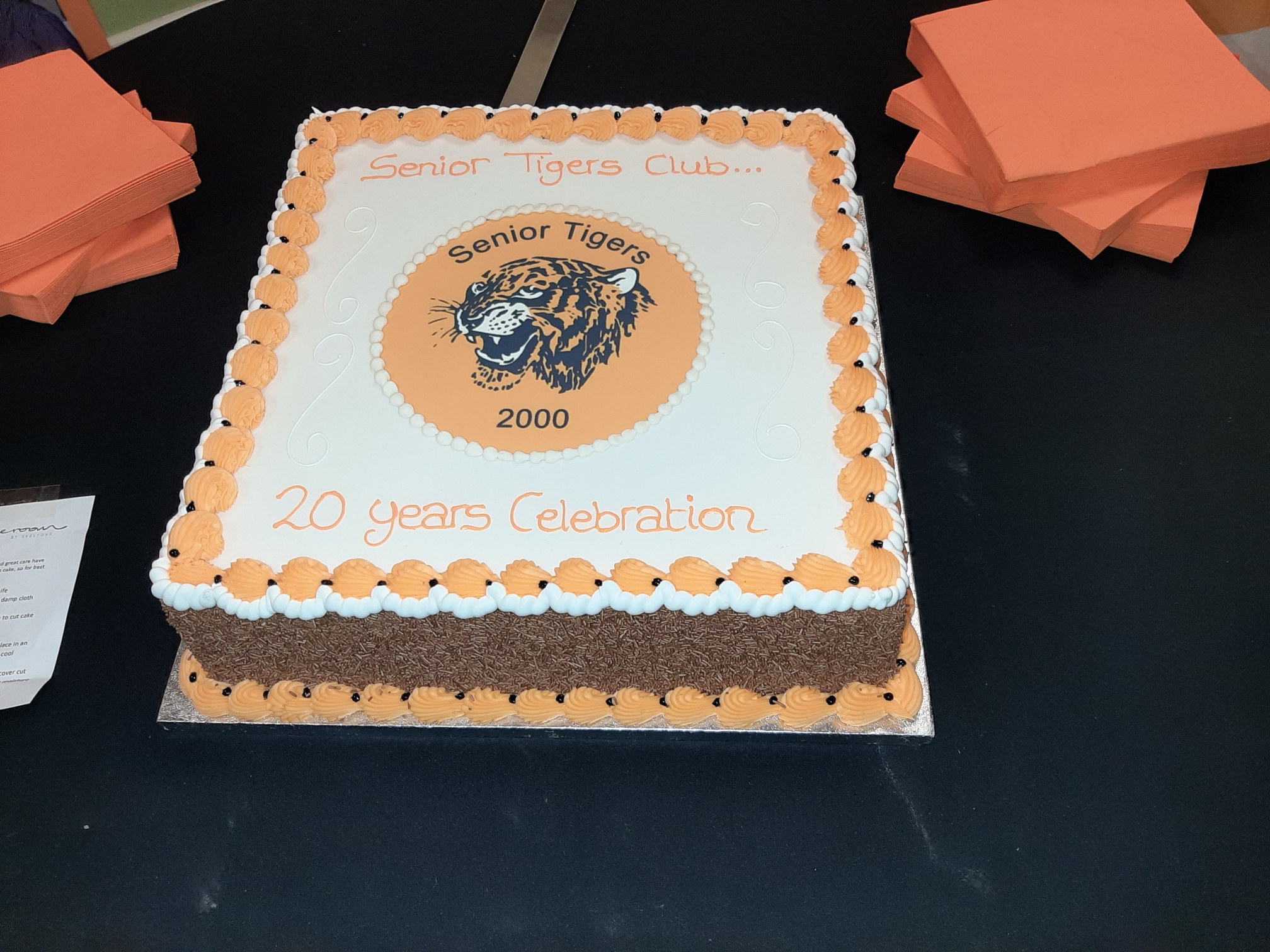