History of the Senior Tigers

The Senior Tigers Club came about as part of ITV’s Year of Promise in partnership with the Nationwide Building Society and The Football League, in 1999.

Most football league clubs decided to make their Promise to the youngsters of the club but we at Hull don’t follow what everyone else does. Hull City Football Club decided to “Promise to create an organisation for their senior supporters which will make them feel an integral part of the Football Club within the community”. The letter and application form were completed by David Capper, the Director of Football Administration at the club, and Andy Dakin, the Commercial Director. The form was sent to the Football League for approval.

Following the approval from the Football League, each club which joined the scheme received a grant of over £10,000. The Senior Tigers Club was launched at the home game against Exeter City in the Nationwide League game on Saturday 4th December 1999.

A meeting took place at the Tiger Club Lounge at Boothferry Park in January 2000. A working committee of 8 was formed and the inaugural meeting of the Senior Tigers Club was scheduled for 3rd February.

David Capper chaired the January meeting but soon handed the control over to the ‘elected’ committee. Most of the members of the committee had a close working relationship with the Football Club as they all had various jobs on match days, from the ticket office to manning the turnstiles when required and generally helping out when needed.

Referring back to being ‘elected’ as Gordon Towse recalls, it was very much a case of David Capper saying to Gordon at one particular time in the ticket office: “You are the Chairman and Mavis (Boddy) you can be the Secretary”. Mavis also knew life long supporter Alan Tichias and persuaded him to be the Treasurer. The others coerced into being committee members were Joyce Towse, Ilona Tichias, Betty Corfield, Shirley Cross and Gordon Owen. David’s decision has proved over the years to be a good one, as this committee stayed together for 15 years and built a solid foundation for the Senior Tigers to grow.

The inaugural meeting in February, which was held in the Sponsors Lounge, attracted nearly 50 members all enjoying a lunch provided by the Football Club. By the time the March meeting was due the Sponsors Lounge wasn’t big enough so the Executive club room was called into action to house the ever increasing membership. 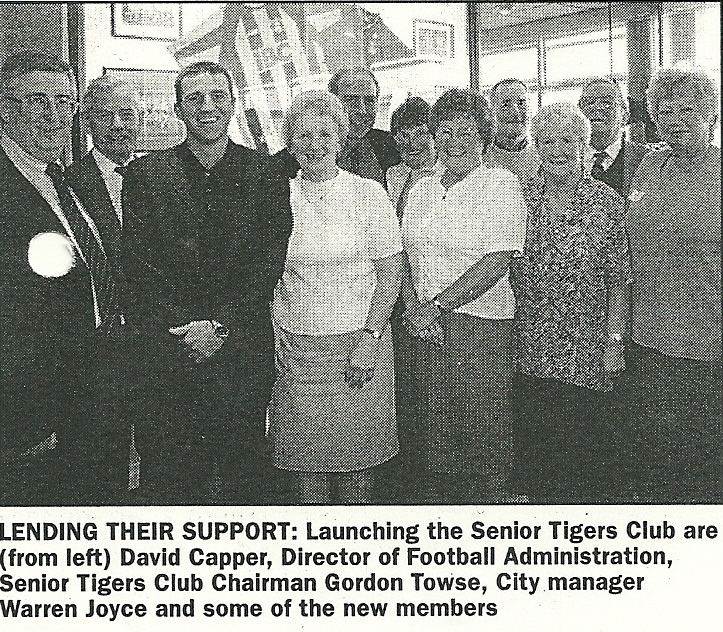 In the first couple of years, the newly formed Senior Tigers Club received help from the Football Club under the Chairmanship of Nick Buchanan by making rooms available for their monthly meetings at Boothferry Park.

For the Christmas lunch, the Business Club room was made available. When the membership increased the Executive room was used. When this room became too small a section of the gymnasium behind Bunkers Hill (what memories does this name bring back?) was transformed using nets and curtains to resemble a marquee (it did have other names).

Along came Dr Assem Allam in 2010 and saved the club from extinction and invested millions into the club. It also brought changes for the Senior Tigers as the free use of the Wilberforce Suite and refreshments came to an end.

When Adam Pearson took control of the club in 2001 he not only gave the Senior Tigers his full backing but attended some monthly meetings and lunches. In January 2002 the Football Club moved from Boothferry Park to the brand new KC Stadium. Adam made the Whiteley Suite available when that became too small we moved to the Carter Suite, then into the Wilberforce Suite (now known as 1904 Suite). Not only did he make the room free of charge but also provided free tea/coffee and biscuits.

In 2008 the ownership of the club changed once again and Paul Duffen became Chairman and he also continued with previous arrangements for the Senior Tigers at the KC Stadium.

Little did we know what troubled times were ahead for the Tigers especially in 2009/10 when the club was in danger of going out of business. 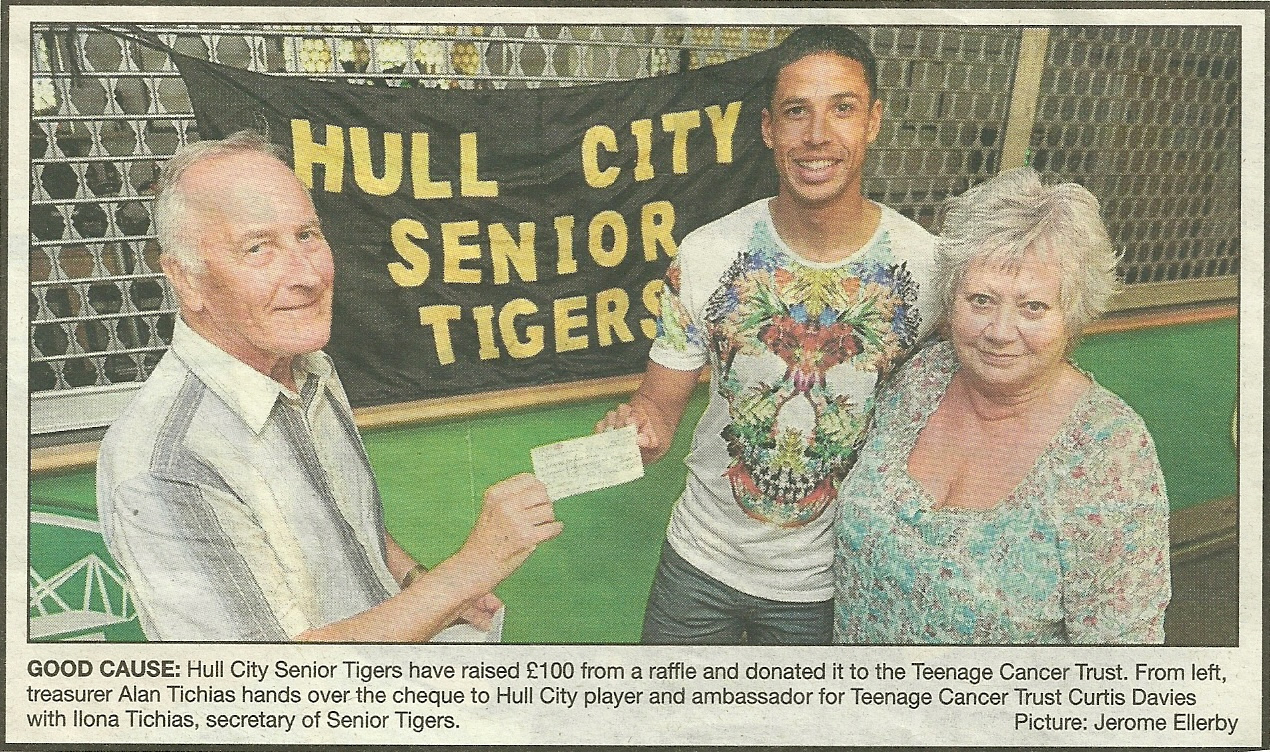 The charge for the use of the room was beyond what the Senior Tigers could afford and so the decision to move to the more affordable Sports Bar (later to be renamed as The Dugout) was made.

In 2015 teas & coffee were once again made available to the Senior Tigers free of charge. This was brought about with the help of James Mooney the Marketing & Online Commercial Manager for Hull City.

The initial subscription in 2000 to become a member of the Senior Tigers was set at £5.00 to be renewed annually. With this membership, you were entitled to various benefits such as a 10% reduction in the club shop.

For those interested there are detailed yearly financial reports available from the first year to the present day by visiting the Financial Reports page.

Initially, the Senior Tigers Club year ran from January to December and in 2004 it was decided to change to coincide with the Football League season so the 2004/05 year started in September and ended in May. Also, this coincided with the addition of an end of season lunch in May to add to the already popular December lunch.

Throughout the history of the Senior Tigers Club they have, when funds have been available, made various donations to local charities. In the early years when times were financially difficult for the Football Club, they also helped to sponsor a number of players’ kits.

Since 1999, at the first meeting for the new season the Chairman has given an overview of the previous year’s speakers and events. These can be viewed by visiting the Chairs Review of the Season page. These end of season reviews give a great indication as to the variety of speakers that were, and still are, prepared to give up their time to come and speak at our meetings and answer questions from the audience, all in their own time and free of charge.

From the very beginning of the Senior Tigers Club, excursions and trips to other football clubs’ facilities have taken place. Over time, these trips did decline for various reasons, but at the start of 2015/16, the trips were reintroduced with great success. The history of these trips can be viewed by visiting the Social Activities page

We hope the above account has given you more of an insight to the Senior Tigers history. We do not doubt that we have only touched the surface and that there is a great deal of information that you, the members and supporters of Senior Tigers, could contribute.

So we invite you join in on our Share Your Memories by adding your own personal account of things you remember that could be shared with others. With your help we can build up a unique History of not only the Senior Tigers but of Hull City Football Club from the spectators/supporters point of view.

We thank you for taking the time to visit our website and look forward to reading your recollections down Memory Lane.