There was an air of expectancy as we gathered in the Dug Out for our February meeting, it was just 2 years since we had held that most exciting MEMORABILIA DAY and now we were about to see the launch of our On-line Memorabilia Gallery. It was another bumper turn out too, the room was packed.

After the opening preliminaries Tony Conway was invited to speak to the meeting. In the past two years Tony has been the key lead to creating the Memorabilia Gallery but he reminded us that the vision had come a little before. It was October 2017 when the Hull Daily Mail gave us full and free access to their photo archives and the challenge was on to preserve these for future generations. What the newspaper had buried in their archives reminded us that this was also true of many Hull City fans who have collected memorabilia over decades of support. They too needed to be preserved before fate took a hand and they became lost. Tony said that this gave rise to the idea of a permanent Archive/Museum and that it was soon apparent that they had unwittingly “unleashed a monster!” Tony helped to gather a team of volunteers, Helen Carter, David Jackson, Trevor Richardson, Peter Lincoln, Roy Bly, Ian Puckering, Dave Norris, Martin Bachelor, Gordon Towse, Stewart Tomlinson, Brian & Brenda Becks and the key to it all, Rob Wilson.

As things developed they found cooperation with Tiger Base who already had a mass collection of statistics and programmes going back to 1946, and also Mike Scott who have created pen pictures of every Hull City player. Approaches were made to the football club and also Tiger’s Trust, the latter being particularly supportive. Other sources of encouragement included the Hull History Centre and the National Football Museum in Manchester.

For the launch of the On-line site we had an archive of 11,000 programme images and 1400 images of memorabilia scattered among fans. The aim is to have every single programme scanned, covers and contents. The earliest programme that can be viewed is 1913 and we now have a further four even earlier programmes which will shortly be added to the contents.

Rob Wilson, who it should be noted has spent endless hours preparing every image for the site, was then invited to give the members a demonstration of what they will now find when they go to the web site. He was able to show members what they would find and how will a few simple touches they would be able to navigate themselves on the site. He showed members what they could expect to see, old tickets, trophies, medals, letters, kit & clothing, novelties, statistics and photographs, many photographs. Today the site was up and running for the members to use but a public Press /Media Launch would follow at a later date.

Following the presentation there was Vote of Thanks to Tony and all the team and loud applause followed. A special vote of thanks followed for Rob Wilson and Pete Magee who services our web site.

Before we moved to our special guest speaker the members were informed of the sudden death of Chris Blakeston, one of our key Academy coaches at Bishop Burton. Over his many years with the club he has helped to bring so many lads through into professional football and his tragic and early death is a massive loss. He will be remembered at the up-coming fixture against Swansea City.

Our February guest was an ex-player who the Chair described as “the ultimate professional”, we welcomed Andy Dawson. Andy was born in 1978 and grew up in Leyburn in Wensleydale. He is the eldest of three lads, all of whom would become significant professional footballers, Michael, ex England Spurs, Forest & the Tigers, and the younger lad, Kevin. Growing up they played football together in the street before bed. Local teacher, Lee Wasden, an old pro from the game, saw the emerging talent and nurtured the lads. They would play for Leyburn Town, Northallerton Town and then on to Nottingham Forest.

Andy was first, as the eldest, and had trials with Forest, then a top Premier League club, and quickly he was signed on, that was 1995. Both his brothers would follow. Andy recalled that he was made ‘Boot Boy’ to no less a player than Stuart Pearce but Stuart kept stables and horses. Soon he was taking young Andy down to the stables and invited to ‘muck out’! Andy’s debut came in a League Cup match against Leyton Orient and this was followed by two matches on the first team subs bench. He was ready for more and Brian Laws called in 1999 and took him on loan to Scunthorpe United but what they saw soon persuaded them to go back to Forest and sign him on permanently. One of Andy’s earliest games for Scunny was at Wembley Stadium in the Play-off Final, they won and were promoted. He went on to play 186 games for United and scored 9 goals. It was then in 2003 that Peter Taylor enticed him to cross the river and join the Tigers. His start was not so good, on pre-Season tour to Essex they played at Canvey Island and Andy was tackled by Damian Delaney, leaving him on the side lines for 2 months! That season the Tigers were promoted to League 1, their first promotion in 19 seasons. Like buses once one comes ….. well, Tigers went straight through that division and were promoted to the Championship in 2004. Andy was now a firm fixture as City’s left full back, in season 2006/07 he was voted Player of the Season. The following season he was back at Wembley for the Play-off Final against Bristol City, another victory and Andy’s third promotion. Phil Brown may be remembered for one Premier League moment but Andy said that he was a great leader and that “players would run through a brick wall for him”. Andy, meanwhile, was one of a very small group of players to have played in all four divisions. For two seasons in the top division he was an ever present and asked for his stand out moment he responded – Arsenal away at Highbury. Andy said that people kept coming up to him and say “I can’t believe we’d won at Arsenal” and that he would reply “Neither can I!”

During his playing days he was well known for his set piece ability, direct shots and crosses. He did admit that he practised constantly but he also said “I believed I had the ability”. His club Testimonial sadly came after he had moved back to Scunthorpe but they were not too excited to find that his commitment to the game meant he’d miss an Iron fixture! The move was about his future as playing days were nearing the end he was also able to start his coaching career. He will always be remembered here, the first player to win four promotions with the club. Now, after a few seasons transitioning into coaching he has returned to the Tigers to take up a coaching role in our Academy at Bishop Burton. Welcome back lad!

There were numerous questions from the floor. Asked about managers he mentioned that Klop (Liverpool) was the manager that everyone would want to play for. At the Tigers, his best coached were Phil Taylor and Steve Bruce. He saw that Keane Lewis-Potter was a ‘stand out’ player for our future. Others with a promising future were Jacob Greaves (son of Mark) and Max Sheaf. Maybe we need to keep an eye out for Dawson Junior who is now progressing on the books at Scunthorpe! Asked about the GPS tracking equipment that players now wear he said it was more for the sport’s scientists who can use the information to ensure that players get the right preparation and recovery to avoid injuries. They were more about developing fitness than measuring effort. He also mentioned that in a recent game with Leeds Juniors the GPS readings were the highest we had ever recorded yet the performance was their poorest!

It was another fantastic afternoon. We saw another excellent Raffle and members kept booking for the outings. Scunthorpe Steel Works has two coaches and is fully booked, in March we have Wold Top Brewery t o look forwards to and then a trip to the Battle of Britain Memorial Flight at RAF Coninsgby. Additionally we are fixing two or three visits to the Deep with their Silver Sharks programme and sponsoring North Ferriby United’s home fixture against Dronsfield Town on March 28th. At least 30 members signed on for the match! 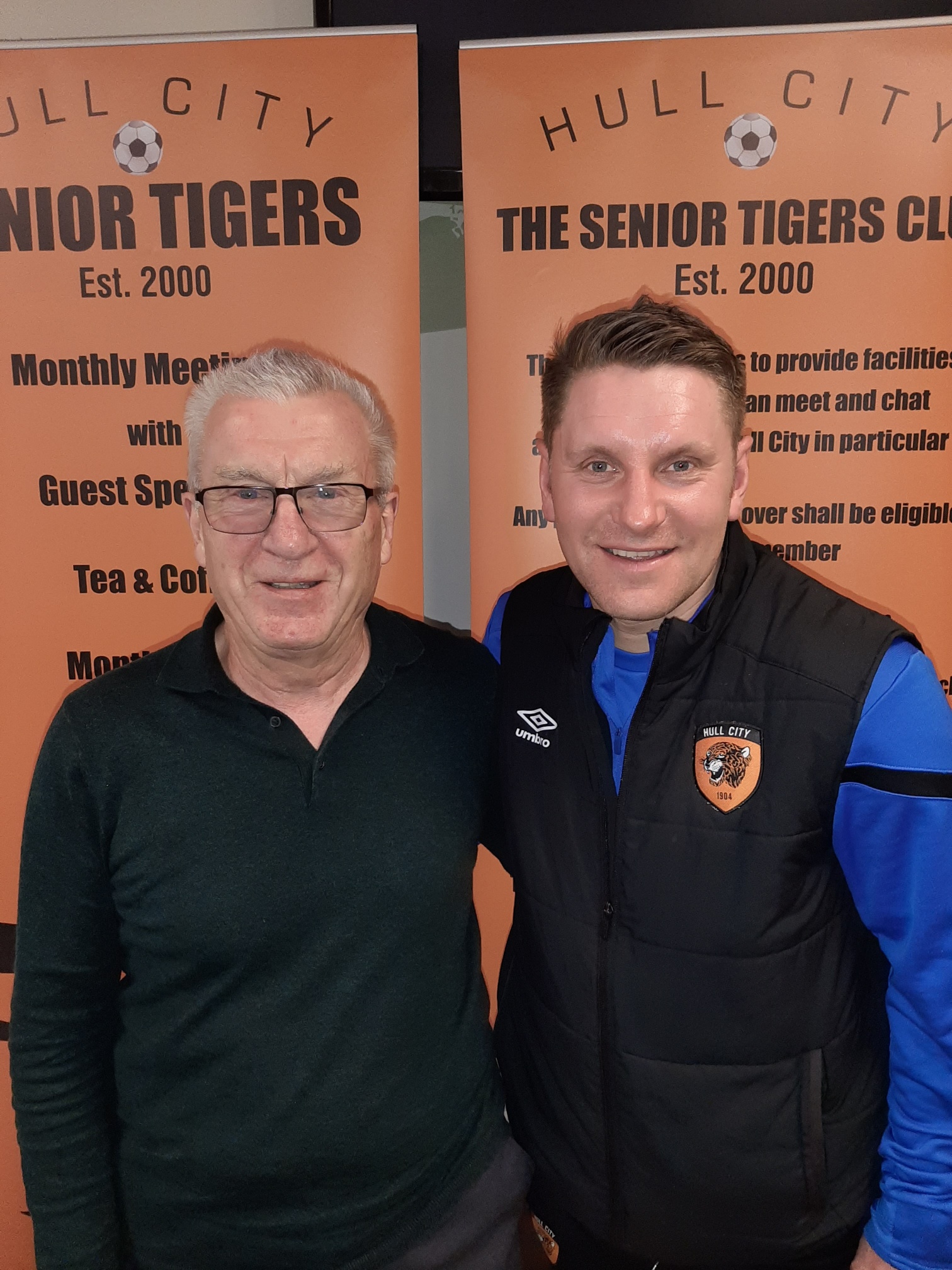