There was another great turnout from the Senior Tigers, 176 turning up for the opportunity to be introduced to their 1st Team Coach, Grant McCann. Perhaps the cynics might have been expecting a ‘no show’ in the light of recent results, but cynics are rightly dismissed. Grant was as good as his word and joined us at the Chairperson’s Table. David, with genuine concern, kindly asked him … “How are you?”. Grant responded sincerely saying, “I’ve been better”. Suddenly we all seemed to warm to him and so the interview proceeded.

He grew up in Belfast, 1980, at the height of the troubles, learning how to survive and playing football. His first love was the Linfield team but recalled how timing worked for him, just missing the bombing of a local hotel. He had only taken football as a serious thing as he approached 12 years of age, a relatively late starter, and at 15 he was playing at youth level for Distillery. Fortune smiled, he was seen by no less a person than Harry Rednapp and offered the opportunity to join the youth set up at West Ham United. It was a good time to be in such a squad, the under 16’s at the Hammers producing 5 full internationals, no less. That included players like David Heeley & Aaron Hughes. He settled in, although he missed home. Ahead of him in the Academy would be players that he had to try and match – Michael Carrick, Joe Cole & Frank Lampard, some challenge!

Eventually his opportunity was about to come with a debut promised, only for him to turn his ankle in training. His opportunity was gone and Michael Carrick took the place. He eventually made 4 appearances for the Hammers before taking the opportunity to go out on loan. It was first to Livingstone in the Scottish League, then Notts County before Cheltenham Town came calling. Playing in the lower levels was an eye opener for a lad already used to being molly-coddled at West Ham. No such privileges down the leagues but the opportunity to learn and develop his skills. He readily admitted that he owed so much to Cheltenham, describing them as an “unbelievable club”. He played a total of 30 games for Cheltenham during his loan period and scored 3 goals too. His transfer was completed in 2003, for a club record £50,000, and he went on to make 158 appearances and score 31 goals.

In 2006 he moved on to Barnsley, initially on loan and then bought for £100,000. He scored a 92 minute winner in his Tykes debut against Ipswich Town but things didn’t work out in South Yorkshire. He admitted that he “didn’t perform” and in 2008 he moved to Scunthorpe United, playing a total of 102 games for the Iron and scoring 18 goals. In 2010 he moved to Peterborough United and was handed the captaincy on arrival, taking over from one George Boyd. His time at the Posh saw another 128 matches and 29 goals. His playing career would draw to a close in 2015 and initially he moved home and joined Linfield, playing just 5 games when the call came to return to Peterborough following the sacking of manager, Darren Ferguson. Suddenly McCann was transitioned from player to coach. He had played 482 matches and scored a credible 86 goals during his playing career. Add to that three promotions via the end of season Play Offs, with three different clubs and in three different stadiums. First with Cheltenham at the Millennium Stadium, then with Scunthorpe at Wembley and finally with Peterborough at Old Trafford. Quite an achievement, to which he modestly added that he was also Man of the Match on all three occasions!

Grant is also a full Northern Ireland International player. During his loan at Cheltenham he was called up by Sammy McIlroy to play for Northern Ireland Under 21’s, playing 11 times and scoring 3 goals.

Full international call ups would follow. Between 2001 & 2012 he played 39 games for Northern Ireland scoring 4 goals and was rightly proud, yet he seemed to hold even greater pride when adding that his 14 year old son was making his international debut on the following Sunday.

Grant the manager. He spent 3 years at the Posh before he was relieved. Soon after Doncaster Rovers called him in and he took the club to the 1st Division end of season Play Offs where they were beaten on penalties in the semi-final away to Charlton Athletic. Soon after that Hull City gave him the opportunity to move into the Championship. He accepts it was a slow start while players were adapting to the club and him but then they started moving forwards and by the turn of the year there was optimism. We are all only too aware of how circumstances changed in the New Year that finds us struggling. “It’s a tough league” he said of the Championship.

Grant was quizzed on other issues, like his family. He is married and together they have three sons and whilst football still important so is family time. He knows he failed to get that balance between club and family at Peterborough but does all he can to ensure it now. He does enjoy some escape on the golf course.

He was asked about the reason behind so many injuries and commented that the boots players use today are very light, made of plastic and offer very little in the way of support and protection. 5/6 of the current injuries have occurred when no other player was involved.

On the loss of Jarrod & Kamil he replied that he felt he was fortunate to have Jarrod for so long but the life-changing wages being offered in the Premier League were hard to oppose. Of Kamil he said “he’d been trying to leave the club for nearly 3 years!”

Looking to the future he recognised the huge asset we had in our young players. This included reference to KL-P and young James Dixon who had just signed a new contract. He told us that the Under 23’s join the 1st team players every Tuesday.

He was asked about the return of Andy Dawson, describing him as a “Club Legend” and that he was a superb recruit with a wealth of experience to offer. 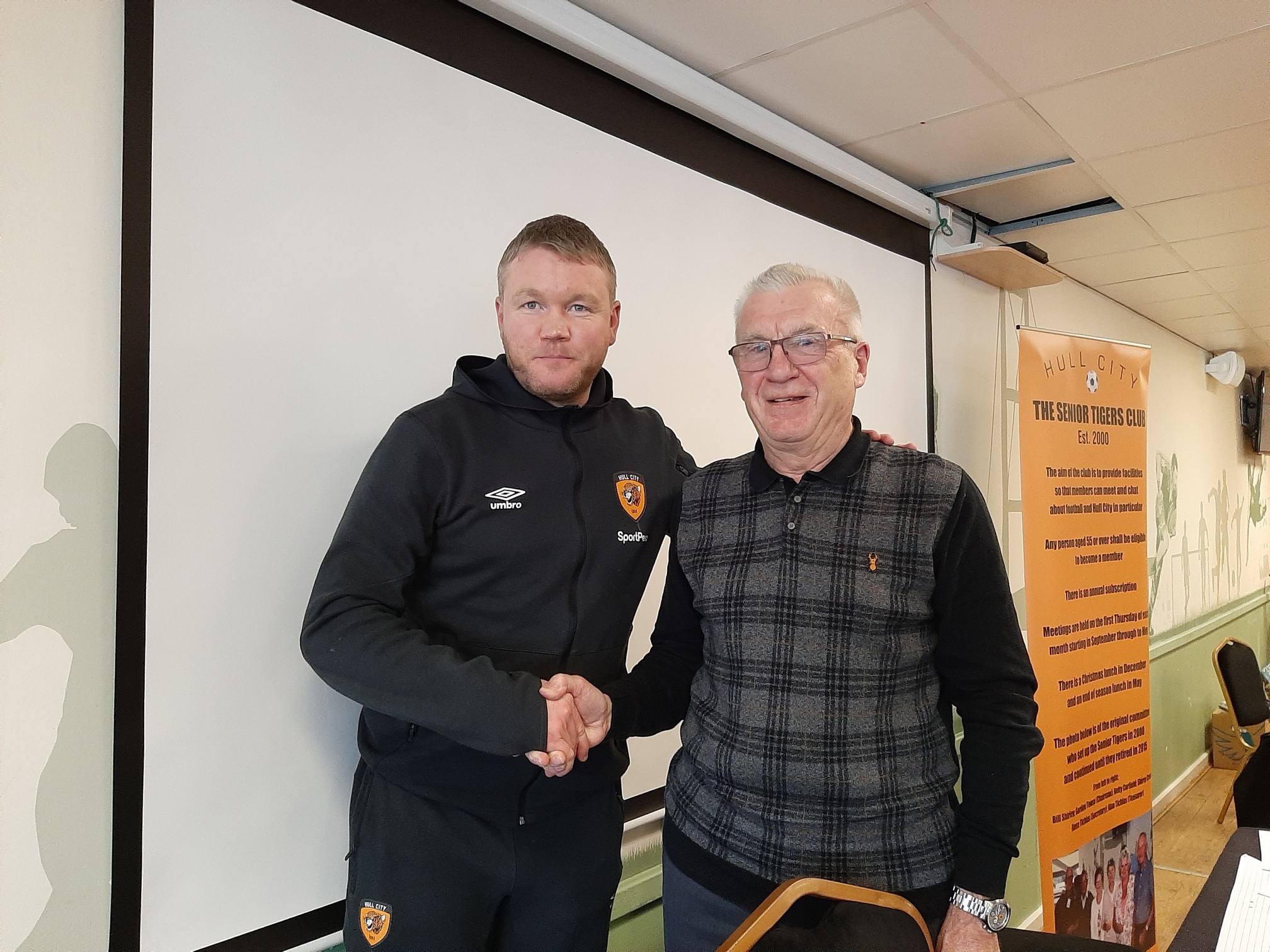