Another month arrives and members were back in the Dug Out ready for their monthly meeting. Around 125 were present on a pleasantly mild afternoon – with the doors open the mild climate was a blessing! Amongst the crowd were at least two new members and they are very welcome.

David welcomed everyone, including a special welcome for Shirley Cormack who had recently joined the committee. David had to announce that, with regrets, the football club was unable to provide a speaker. With the new coach settling in he was hoping we would appreciate how important it was for him to get to know all his players. Disappointment gave way to recognition of a greater need. We would not be bereft, however, because we had one of our own ready and willing (just about!) to fill the gap. More of that later.

From the chair, we were then informed that KCOM had increased their kind offer of 4 free tickets to every home match, from this month t would be six tickets. These would be distributed at the end of the meeting via a free raffle.

The Table Tennis programme had been launched alongside the twice-weekly Walking Football. At the moment it is only a trial event on the first Monday morning each month. Pat Ellis (Committee) is co-ordinating this new activity. Her contact is 01482 651467.

Babs had a number of new membership cards waiting for collection and made the plea that if members change their email address (or mail/telephone) they should let her know. The popular monthly outings are booking up in record quick time. The next three (Feb/Mar/Apr) are all fully booked but people can request to be placed on a stand by list. Barbara was proposing a May visit to Matlock and possibly a further trip in June. Babs then announced that we were looking ahead to our May Luncheon and wondered whether we might give it a Jubilee flavour, as we mark the Queen’s incredible 70-year reign. Safe to say there was an immediate and positive response from the members.

Dave mentioned that we had prepared letters of welcome to send to our new owner, Acun Illicali but then he had then received an invitation to meet him before the PNE match. He and Babs would be able to represent us over lunch and introduce the purpose and hopes of the Senior Tigers. This is brilliant.

The KCOM Partnership is slowly unfolding. They want to hold a series of Drop-in Sessions for our members to help them to expand their confidence in the use of the internet. These, when announced, would be free of charge and probably held at the MKM Stadium. Hands were raised to express an interest. James Fairbank, who leads KCOM’s Community team, will be joining us at our March meeting. We are also hopeful of launching our new Website and KCOM have promised to help us prepare a promotional video to mark the occasion.

Our Guest speaker was then introduced, none other than our own Paul Bryan who was going to unpack his remarkable life story. The laddie from the Liverpool back streets who would become the Head of Hymers Junior College, had a career as a police officer in Warwickshire and now a Racehorse owner! You couldn’t make it up!

He started by sharing how near he came to never being! His dad was managing a Liverpool local during the Blitz. When the sirens blared nobody ran for cover in the shelters, they took their drinks and hid under the bar tables! The message came through that an incendiary had dropped on the pub but not exploded. It was resting on the roof. Dad took a ladder and a bucket of sand and immediately set to climb to the offending bomb which he then covered in sand only to find that someone below had actually nicked his ladder! It could only be Liverpool!! Meanwhile, news came of a German Paratrooper who had landed nearby and his colleagues below set off courageously to intercept him. Dad was left, stuck on the roof of the Palatine Hotel. His mates were less fortunate as the paratrooper was in fact a parachute mine that exploded and killed them all. Without the ladder there was no doubt that dad would have led his lads to their death and Paul, sweet as he is, would never have been born. There was also the story of the drunken monkey. It was supposed to be a parrot on the end of the bar but Paul’s brother, a seaman, had returned with a monkey instead, which thrived on the free drinks plied by the drinkers. It was soon an alcoholic!  Paul also mentioned how his dad lost his job and the family flat at the Cygnet Hotel for risking the bar takings on a ‘dead cert’ … it was probably ‘dead’ but not a ‘cert’!  Paul went on the share how he might have become a Catholic Priest following an early teen experience of God but the Seminary was less convinced and said he’d better wait. He did and discovered Rugby, played with a passion, and Girls! Paul then headed for London where he would train as a PE Teacher. From there he was offered a job at St Benedict’s School in Ealing under a Head/priest who spent all his time making marmalade! The compassionate side of Paul was quick to emerge. He noticed how one lad stood aside when it came to playing football, “I don’t like it” the lad said and wisely Paul took him into a small weights room in the gym. “Take your book with you and every now and then drop one of the weights!”. The lad responded, read happily and dropped the occasional weight. So, a youngster found acceptance and a helping hand … and became a famous comedian that everybody knows!  All, however, was not well at St Benedict’s. Behind the scenes, things took place that he never saw or knew about. Sadly, there was a Paedophile ring that would later be exposed and lead to the Head and 4 others being imprisoned. Our Paul was glad he’d got out without any involvement.

He was off to Warwick School where he was appointed Deputy Head to the grief of nearly all the senior staff team who had presumed that one of them was destined for the post.  Not a happy time for our Paul! A friend, a policeman, suggested he might try being a Special Constable. Still, Paul was discovering an underside as his team leader handed out expenses form, one for him and one for his wife who was not involved!  Paul, always a man of principle, declined the second form. The scam was inevitably discovered, colleagues were dismissed and Paul saw the opportunity to move full time into policing. His stock was good and even at 5’ 71/2” Paul was pushed through all the doors! One significant arrest led to finding the killer of a Bristol girl and later evidence showing the guilty man was named as the likely killer of a missing estate agent. Paul was making great strides until asked to fill an overtime shift, an horrific accident saw him pensioned off, his promising police career was over.

So, he returned to teaching. Bolton School, Silcoates (West Riding) and finally Head of Hymer’s Junior School. Before accepting the local appointment, he gave his terms! Full control over discipline, places for my sons and new buildings. He did not expect to be appointed but Hymers knew they had their man. Paul quickly set about turning around the lax discipline and plans were put afoot for new buildings to replace the old and inadequate ones he inherited. So, Paul thrived in his chosen vocation until he stepped down in 2007. He set up a tuition business to provide support for kids who were struggling at school and thereby rescued many a future life. The applause was terrific!

The final act was our wonderful monthly raffle. On offer was a £40 voucher for the Percy Arms at Airmyn, £20 voucher for the award-winning Fields of Anlaby, a Harrington Jacket and so much more. The raffle raised £264. 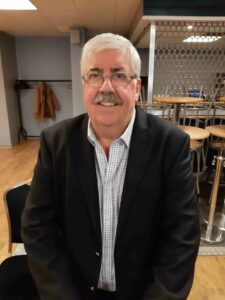 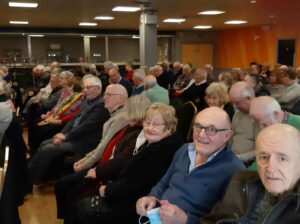 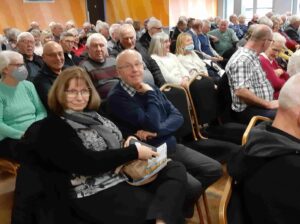 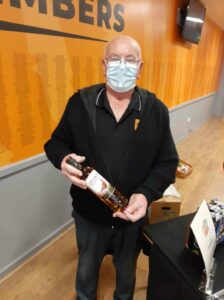 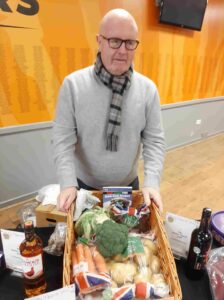 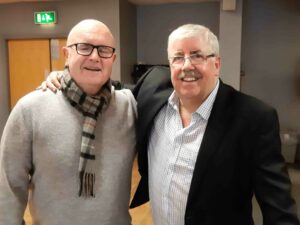