Back in the mid-1960s when our beloved football club did not organise any away match travel there were very limited options of coach transport to support the Tigers away from Boothferry Park. Hence in 1965, yours truly Graham Kellington and Peter Lincoln formed KELLINCS TIGER TOURS to provide supporters with an additional new choice and whilst still at school we ran our first away trip on the 20th November to Shrewsbury Town. The coach was full and the Tigers earned a valuable point with a 2-2 draw (Ian Butler and Waggy) on their way to promotion as the Division Three Champions.

For four successive seasons KELLINCS TIGER TOURS took supporters to away matches all over the country to as far north as Carlisle United, east to Norwich City, south to Crystal Palace and west to Bristol City.

One of the most memorable trips was Easter 1966 when on Good Friday with a full coach of 41 fans we went to Oxford United and bathing in glorious sunshine we saw the Tigers gain a 2-0 victory (Waggy and Ken Houghton). We then moved on to London and an overnight stay at the St. Athans Hotel, Tavistock Place, Russell Square – still open for business – despite one of our lot sitting on a bedroom hand basin, causing it to hang off the wall! The Easter Saturday weather was in direct contrast to the previous day with pro-longed torrential rain causing all of the games in London to be postponed due to waterlogged pitches but for the very lucky exception of the Tigers’ match at Brentford. This was helpfully publicised on the pirate station Radio Caroline and our big following of supporters on the open terracing was swelled by lots of Leeds United fans as their fixture at Arsenal was one of the foul weather victims. There was no animosity between the supporters in that era and together we all cheered the Tigers on to another exciting triumph by 4-2 with all of our goals scored by the irrepressible Waggy. The coach fare for this round trip was £2.00 plus another 10 shillings (50 pence) for the B&B accommodation. The whole trip proved to be an enriching adventure for a coach load of teenagers from the north as for many of them it was their first experience of London.

We had lots of fans on the KELLINCS TIGER TOURS coach trips who had also been friends from school and after we had both started work we made new friends with other Tigers supporters who also became regular passengers and who booked on almost every trip we organised. However, although we had a good nucleolus of regular travellers we often still had to work hard to ensure a full coach-load and without any of the current modern day communication or copying facilities we used to laboriously produce lots of type-written small advertising flyers for distribution to supporters on Bunkers Hill to help fill any vacant seats.

The road networks were without the present day motorways and there were very few dual carriageways or by-passes so consequently all journeys took considerably longer than nowadays with our departures to long distance matches usually starting from Hull outside the ABC Cinema, Ferensway at about 11.00pm and those into the Midlands and Lancashire as early as 7.30am. We always used Frostways Coaches based in St. George’s Road which was also a pick-up point and it was our normal practice to collect and drop-off fans at many other stages wherever requested en-route – all part of the KELLINCS TIGER TOURS fans luxury service!

Brenda takes up the memories, “We often sang, ‘This is the best trip we’ve ever been on’, as we enjoyed our first journey in the Premier League but back in the 1960s we also sang that song in response to the trips organised by our school friends Graham and Peter. Quite a gang of us from South Cave and North Cave travelled the country, not only supporting our favourite team – the TIGERS! – but also meeting new friends and having a great social time. Our regular coach driver was Jack Boulton, known as ‘Happy Jack’ who became a big friend to many of us. He was very easy-going (he had to be) and he helped us out of a few scrapes by e.g. diverting the coach to pick up a fan from a police station who had been arrested for throwing toilet rolls, going to the A&E in Pontefract to collect two fans hurt in a fight after we had stopped there on a return journey and putting his foot down when the coach was attacked with bricks by Palace yobs!”

Sylvia recalls, “Following the Tigers gave us some exciting matches to watch and great nights out on the way home. At one away game quite a few of us narrowly escaped the clutches of plain clothes policemen who had infiltrated the crowd and found us throwing oranges at our favourite goalkeeper Ian McKechnie. It was all in good fun as Ian had once commented he loved oranges and it became a tradition for our fans to throw loads of them to him at every home and away match but the police took a lot of convincing! ‘Happy Jack’ drove us thousands of miles and never quibbled about either stopping at public houses on the return journeys or having alcohol on the coach. One of the favoured visits on the way home from journeys south of Bawtry was to the ‘White Hart’ pub in Thorne, near Doncaster where there was a concert room. We used to completely take over with some of our gang allowed to go on the stage playing the drums and using the microphone to sing a few of the Tigers’ songs. We had lots of happy nights in there”.

Happy Jack’ also helped us to create a very comradely and friendly atmosphere allowing the inside of the coach to be adorned with black and amber scarves, banners, posters etc. Yet there was one rare occasion when even he was not his usual self. This was for our trip to Huddersfield Town on the 27th December 1966 when after we had picked fans up at Welton and knowing we had more of our regulars to collect in the villages from Brough to North Cave he deduced we were going to be seriously overloaded and so refused to drive on any further. A couple of times previously we had had slightly more on-board than the coach could legally carry but on this occasion we were going to have 49 passengers on but with only 41 seats! However, he knew we couldn’t notify the fans awaiting being picked up (no mobile phones in those days) and of course we didn’t want to let them down so with some gentle persuasion and the persistent chants of ‘Happy Jack’ ringing in his ears he eventually relented and carried on regardless!

Our long journey to Bristol City in March 1967 had late night departures from Hull and Bristol too to enable us to enjoy a night out in Bristol after the match. We knew there were football pitches in a park close to Ashton Gate so we pre-arranged an early morning 11-side football game against some Bristol City fans before going on to support our respective teams. Afterwards some of our number went to the cinema but were so tired they fell asleep and missed the whole film except for the credits!

John Clutterbrook’s vivid recollections are of a big plastic Tiger’s head that had once been affixed to an Esso petrol pump when the oil company’s slogan was ‘Put a Tiger in Your Tank!’ John recounts, “In late 1966 I innocently acquired this plastic Tiger’s head from a relative although some of my pals strongly accused me of handling stolen property! However, I kept it and fitted it with a battery power-pack and light bulbs and it travelled with me on many away trips with KELLINCS TIGER TOURS. 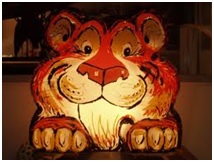 Standing on the dimly lit terraces I would hold it aloft, especially after the Tigers had scored, and it would be seen brightly illuminated from all parts of each away ground. Unfortunately its final demise was in February 1968 when we played an FA Cup third round, second replay against Middlesbrough at Bootham Crescent, York. It was a capacity attendance and in a massive crowd surge it met with a sad and untimely end by being crushed against a barrier with the head’s remains in hundreds of bits of plastic on the terraces.”

Whenever our fixtures in the autumn included matches at Preston North End or Blackburn Rovers we would also go on to spend the night in Blackpool and leave at midnight with ‘Happy Jack’ giving us a full tour of the illuminations. The coach fare for such an extended trip following a five goal thriller at Preston (Waggy and Chillo) in October 1968 was all of 16/6d (or 83 pence)!

Brenda also remembers, “Graham and Peter also formed their own version of a pirate radio station known as RADIO KELLINCS and they produced and recorded record request shows that were broadcasted on the ‘Frostways Wavelength’, i.e. the coach’s loud speaker system. They became a highlight of the trips but they were not so much request shows but opportunities for Graham and Peter to be mischievous with their choice of songs and recipients. Wherever possible they would use the sauciest song titles of the day, e.g. “I Just Want To Make Love To You”, “Let’s Spend The Night Together”, “Then He Kissed Me” and “I Like It” to play so-called requests for guys and gals who were never the perfect match for each other nor had any inclinations of ever being so! I’m sure they had great fun putting it together, and my sister and I (except when the dedications were aimed at us) had great fun listening to it. All in the ‘best possible taste’ but notwithstanding the abiding titters some serious courtships did develop (whilst others probably perished) with six of our friends and usual rear seat occupants eventually getting married, namely Richard Hill and Ruth Waudby; Pete Featherstone and Margaret Barlow; Brian Swash and Pauline Barlow.”

Sylvia finishes, “The trips didn’t stop in the football season as KELLINCS TIGER TOURS also ran summer trips to Scarborough – the close seasons were far too long for us all to be separated. Plus also Christmas Eve trips for the cabaret shows at the White Horse Inn Theatre Bar at Hutton Cranswick. When we look back now we remember what fantastic times we had and how lucky we were to be part of the adventure. Thanks to Graham and Peter for all the organisation when they really did give us ‘the time of our lives’!”